I thought I’d get this next post out quickly rather than pondering and procrastinating over where to start. So, Cycle 1= failed, Cycle 2= failed, I’m not sure whether to classify this as cycle 3 hence the title of the post.

The three month wait seemed like the longest of my life! I mean, the day’s couldn’t go any slower and I just felt like I was constantly looking at my calendar. I’d become more hopeful and optimistic that this was going to be it! I was so sure that I would cross over into 2016 with my prayers answered and a child growing inside me. I was happy, excited and expectant.

Monday 19th October 2015 was the start day for my “not so strong” injections. I was slightly worried because the Gonal F needle wasn’t so long and the medication was in the form of a pen. This new injection, Cetrocide involved more preparation and was a really long needle that HURT!

Cetrotide is used to block the effects of the natural hormone called gonadotropin-releasing hormone (GnRH). GnRH controls the secretion of another hormone called luteinizing hormone (LH), which induces ovulation during your cycle. During the stimulation process, premature ovulation may lead to eggs that are not suitable for fertilization. Cetrotide helps to prevent such undesirable premature ovulation.

After injecting myself, it would bleed, sting and bruise. I knew this wasn’t going to be an easy journey and immediately started worrying that I would run out of stomach space to inject if the bruising continued. I decided I would start an IVF daily journal using a notebook my friend Sandra had given to me. I’d been staring at this notebook for a while, wondering what to do with it as I have many journals and just love writing my feelings down. I’m secretly hoping that one day it can be turned into some kind of book. Not sure who would read it but I guess it would make me really appreciate even more, all that God has done for me. Sorry, going off the topic here lol.

Ok, so I’d take the Cetrocide injections in the mornings which often made me late for work because everyday was a new challenge. My husband would have to encourage me each time and sometimes do the injection for me because I was just so afraid of the pain. One of the common side effects of Cetrocide was mood swings and boy, did my husband feel the brunt of it. There were also days I would go into work stone-faced and my colleagues knew that it would be a “don’t talk to or ask Kemi any silly questions day.” Bad, I know but I really felt that I had no control over it. My husband was just so amazing,  I couldn’t have asked for a more supportive, understanding and caring man. Only those closest to me have seen a real Kemi temper tantrum and I think hubby is the only one who knows how to really deal with it and put me in check! 😊

I had to wait for my period to come before we could move to the next stage- 4 tablets per day. This was the first time I had actively prayed for my period to come, and come quick! As the days passed, I began to doubt whether it would show up and began thinking why did this have to be the month where the symptoms of PCOS kicked in full force? We were back and forth to the clinic every other day for a scan to ensure nothing out of the ordinary was going on and my uterus lining was thickening. Finally, on day 24, aunt flow showed up!

In the meantime, the embryologist had called to ask how many of our 18 frozen embryos we wanted to thaw. It was a hard decision to make and we asked for a day to pray and discuss it. There were so many pros and cons- do we thaw half so we have a reserve either way? If it works at least we knew we wouldn’t have to go through a long process for baby number 2. If if didn’t work, I guess it was the same reasons. But and its a big but, do we thaw everything to give us the best quality embryos? It was hard, there were no guarantees of the quality of the embryos as they were frozen the day after egg collection during cycle 2. After egg collection, you normally have a transfer on day 3 or 5 to enable them to grow. We were going for the day 5 transfer (blastocyst) so that the strongest embryo/s would be selected. We finally decided to thaw all 18 embryos.

By day 44, we were booked in for embryo transfer and my excitement levels were through the roof. The thought of telling our family on Christmas Day that I was pregnant was amazing- I just had to get through that dreaded two week wait. When we reached the clinic, the embryologist came to speak to us and informed us that one embryo had made it to blastocyst and was a strong cell grading. I was so glad that we had decided to thaw all embryos because who knows what would have happened if we had decided on only half…

12th December… Negative pregnancy test result… That day I had agreed to babysit our friends daughter Gabriella as my husband and other friends helped them move house. I wondered how I would get through the day and considered cancelling as I was so distraught. I remembered the Joy Gabriella always brought to me and decided I’d still go ahead. My hubby asked one of my younger sisters to come by and keep me company but I just wasn’t in the mood. At one point, I started crying and Gabriella (13 months at time) looked at me and began wiping my tears away. I knew a 13 month old child was too young to understand anything and took it as a sign that God was telling me it would be ok yet I still kinda felt numb.

I thought I’d share my journal entry with you all- sorry about the handwriting but when you’re overcome with grief and live in a technology based world, I guess this is what you get 😀 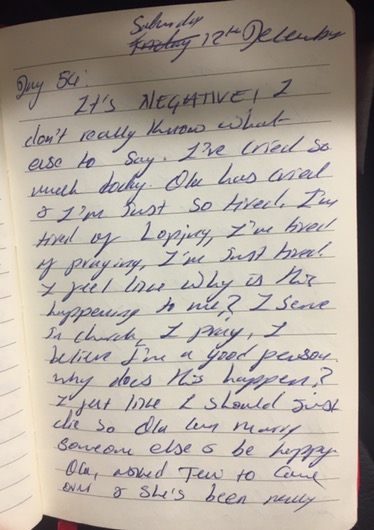 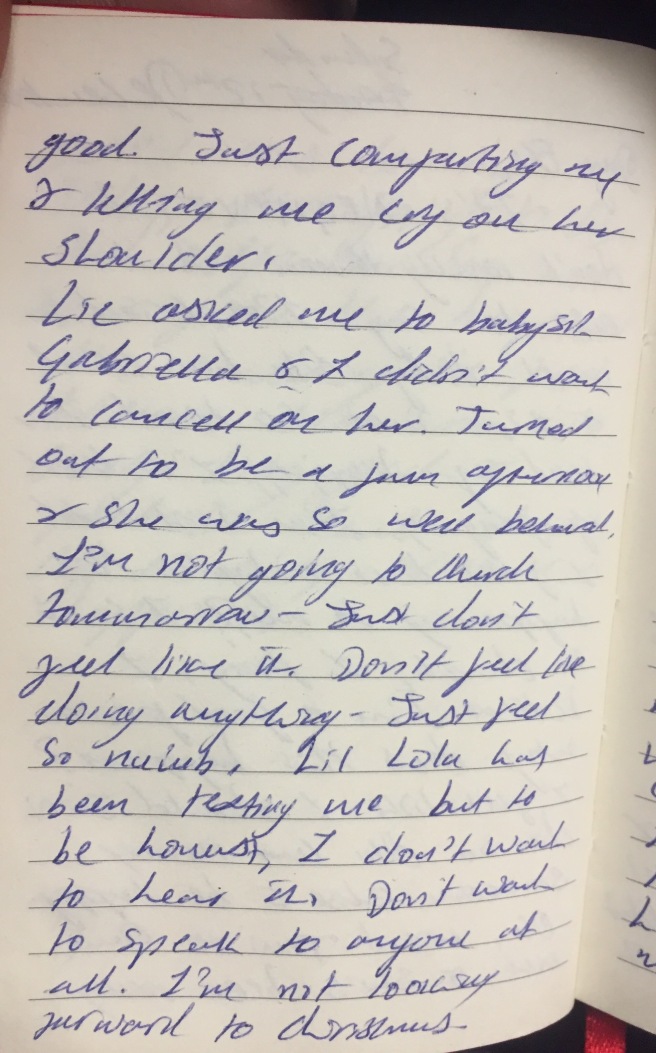 As the weeks went by, those we told kept asking if I was ok because it seemed like I had some kind of personality transplant! I was fine, happy and prepared for the final NHS free cycle. I had no expectations, no fear and knew that this journey was far more than my personal fertility struggle. I didn’t have a problem in producing eggs, my tubes were are not blocked, there is nothing wrong with my womb, my husband was checked and nothing wrong with his a sperm count- this was all to do with God’s perfect timing and that is something we cannot change. We always pray for Him to have His way but sometimes forget that His way may not be in the timeframe we want. I’ve accepted that this is my journey and I’ll keep writing and sharing about it because I believe it’s what God wants me to do.

Be encouraged, Be expectant